There are always events going on in the Fargo region. We know the annual radiothons will start again by end of January. But, anyone who wants to do good and help children fighting for their lives, you can donate to Children’s Miracle Network, Sanford Foundation, or any other charity listed under ‘Gabee’s Charities’ on the above menu.

Our story continues to be played during radiothons in 2020, but we were last LIVE at the 18th Annual Cares For Kids Radiothon, which took take place on January 25th and 26th, 2018 on Y94 Radio (Fargo). You can listen to our recording here.

We had organized a March For Babies team again and we were able to reach our goal of $2,500. Because it’s never bad to crush goals, you may still donate online at http://march.gabee.org/.  The walk itself was supposed to place on May 7th at the MSU Dome, but then ended up being cancelled.

Gabrielle’s twin sister, Hancee, had her picture on display at Walmart stores all over North Dakota and western Minnesota for another Children’s Miracle Network campaign — from August 29th thru October 9th, 2016.

Back in April 2016, Hancee was also featured in the Sanford e-Newsletter. You can check that out here.

On Thursday, April 21st, 2016, we were the Guests of Honor at the Sanford Children’s NICU Donor Breakfast. Lynze gave a 15 minute speech about our time at the NICU, how amazing the staff was, and how it changed our lives forever.

That weekend (Saturday, April 23rd, 2016) we had organized a team for the March For Babies event, which was held at the MSU Dome. Our team actually won “Top Family Team” and Jeff was awarded “Top Individual Walker”. We’re very thankful for everybody who participated and we look forward to being a part of it for years to come! 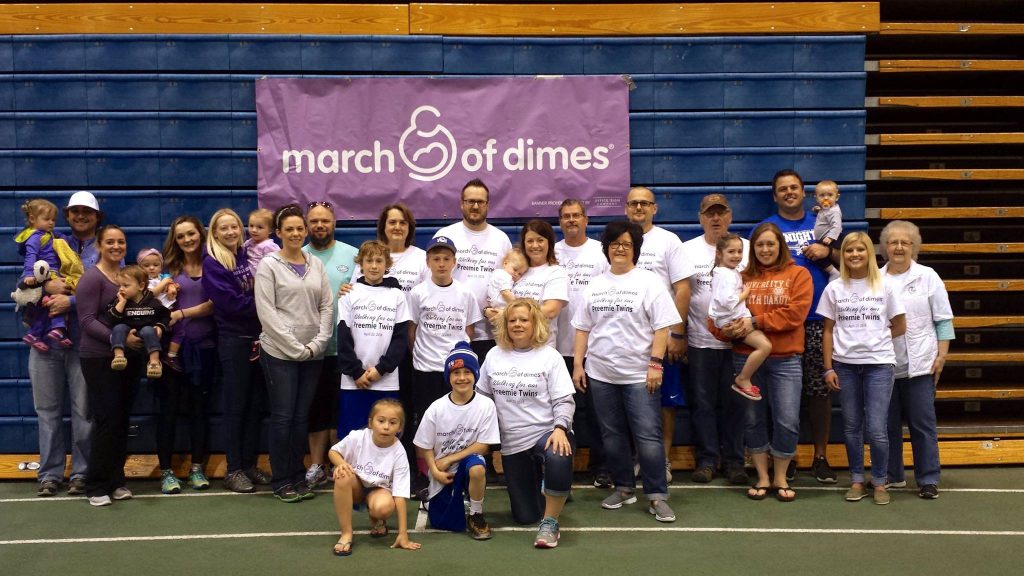 The 2nd annual “Hours of Hope” radiothon for Bismarck was March 9th and 10th on KQ 94.5. Remember, the money raised benefits North Dakota’s ONLY Children’s Miracle Network hospital and Level II Pediatric Trauma unit. Children from all over North Dakota and north west Minnesota receive care at Sanford Children’s in Fargo, ND. Take us, for example. We were referred from Trinity Hospital in Minot and had to take a Life Flight to Fargo on August 7th, 2014. Minot couldn’t handle us at the time. (We weren’t the only family from Minot or further during our time either.)

Fargo’s radiothons took place on January 28th and 29th, 2016 and were able to raise a record $165,000! How awesome! Our story was aired both days during a Power Hour, so I hope it inspired many people to call in. You can listen to those recordings here.